A trip around Thistlegorm today is like traveling through time and many visitors experience high emotions during the dive. It is after all a bombsite with highly visible signs of great destruction and loss. It’s also a giant underwater museum, a war grave, a unique piece of military history and an opportunity to step into the past during a period when the free world was under threat from one of the most tyrannous regimes of modern times. 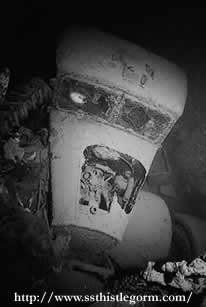 Sunk by German bomber planes in World War Two, SS Thistlegorm has lain at the bottom of the sea for over sixty years. Located in the Straits of Gubal, Northern Red Sea this famous vessel has been the subject of much activity and drama during its two lives as both a seagoing merchant ship and as a world-class diving site.

Despite extensive public knowledge and interest in Thistlegorm, it will continue to inspire a sense of mystery. Jacques Cousteau’s visit in 1955 remains the subject of much discussion and like the legend himself Thistlegorm continues to attract speculation and controversy from beyond the grave.

Divers can visit the wreck from Sharm El Sheikh by daily boat or during a weeklong safari. Located on a bed of just thirty metres in good visibility this is the perfect wreck dive where much of the original cargo still remains. The bow is just fifteen metres below the surface and the propeller at twenty-seven. Measuring over four hundred feet long, SS Thistlegorm often requires several dives to complete an extensive coverage, inside and out.

Currents may occasionally be strong; however, mooring lines tied by the guide allow divers to make a comfortable descent to the shelter of the wreck. Once inside, divers can explore the ship’s holds where time has seemingly stood still. Motorbikes, trucks, guns and wartime cargo, never to reach its destination, lay stacked where it was loaded back in 1941. 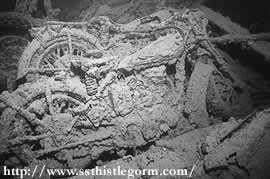 It must be said, that even after several hundred dives on Thistlegorm, such is the allure it holds for divers, that there is always something new to see. Very recently, a local diver claims that he stumbled across a newly discovered locomotive some one hundred and fifty metres from the wreck. The race is on to reach and photograph the engine together with the ship’s funnel, both of which, allegedly, are still attached to the deck blown clean off the ship by the explosion.

Diving SS Thistlegorm requires certification as a trained diver, beyond entry level, through a recognised scuba training agency. In any event, divers visit the wreck at their own risk.

Excerpts from live interviews with actual survivors of SS Thistlegorm under attack in 1941:

“I heard a plane making what appeared to be a second run or at least sounded like a diving run and my training I suppose came out and I just flung myself out of my hammock on the deck beneath and crouched behind a winch and then there was just two explosions and a mass of flame and my hammock above my head caught fire.”

“…I was on watch behind the bridge, and next thing there was a big bang and I realised we had been either bombed or torpedoed, one of the two, but we’d been hit by enemy action…..”

“I made for the side to jump overboard and the rail was almost red-hot under my hand. I don’t know why, but, just as I was going to jump, I looked back and saw the gunner crawling along the deck on the other side. The deck was covered with broken glass and I had to take the bits out of my feet before I could carry the gunner through the flames, which came up to my chest in places.”

“I was on watch at twelve o’clock and about one o’clock we heard the sound of aircraft. We looked across to the Carlisle and there was nothing indicating from her and the sound of the aircraft got nearer and the first thing that we realised was that he was planting a few bombs on us, which, unfortunately, dropped in number four hold, possible number five, but number four I do know, because there was some flames shooting out from there and we……we’d quite a good fire going for a while.”

“…it seemed like two or three minutes I would think, that this huge explosion took place and of course we were looking in the direction of the Thistlegorm at the time and shortly after the explosion there was a huge sheet of flame which lit up both sides of the Red Sea at that point, we could see it light up the Mount Sinai on one side and Egypt on the other side and all the ships and everything around and then all of a sudden there seemed to be a second explosion and still looking in that d irection we were amazed to see what turned out to be a railway engine and it was red hot with sparks flying from it and it was coming in our direction.”